Preparing for a gallery show is something like the evolution of a tiny universe. It begins with coarse fragments that, alone, do not speak greatness. These are simply nondescript pieces that will eventually build upon one another to create something that speaks for itself.

Behind any given universe, a certain level of respect is demanded of the artist responsible for creating it. Sure, a pile of copper scraps doesn’t look like much, but an understanding of the potential of said scraps exists within the artist's mind. My approach to metalwork is this: evolution is both inevitable and is also my greatest ally. Following this mantra, you will never find me creating a blueprint for a finished product from, very literally, square one. Rather, I control the size of the initial chaos - the scraps - and allow inspiration to guide the rest.

It is my belief that as artists, we are vessels equipped with the ability to channel a creative energy outside ourselves in order to produce physical representations of that energy. Essentially, we are completing a circuit between initial inspiration and resulting piece. This is where respect is a powerful tool: our ability to listen is just as vital as our ability to control. To master individual artistic form, a balance is to be reached between the two, and each artist seeks unique methods to create it.

My own methods begin with respect for details, no matter how small. Sanding a 1/4" copper disk to perfection is just as important as doing the same to a 1 1/2" pendant. Both elements will play a vital role in their eventual universe. What's important is not to fear the minute detail's potential to go unnoticed. It is my experience that the smallest piece can have the largest impact, and learning to harness the immense energy packed into such a tiny element can be an incomparably powerful tool to an artist.


Equally as important in finding a balance between respect and control with regards to artistic evolution is utilizing the right tools. Sometimes, acquisition of the right tools can be very, very financially painful.

Take this kiln, for instance. Yes, it cost me a pretty penny, and yes, it sat in my virtual shopping cart for months before I finally built up the courage to press "purchase."

The truth is, if we are serious about what we do, we must sometimes make serious sacrifices and commitments to amplify our creative output. I like to think of this kiln as a megaphone for my artistic voice. It is the epitome of control and respect, as its results vary from firing to firing. 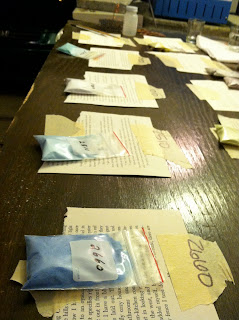 A process called "enameling" turns powdered glass to sheet glass on the surface of metal inside the kiln. These are the beginnings of my enameling workstation, where I have already learned that regular exercise of my persistence and patience muscles is yet another important method in finding artistic balance. The magic of a kiln is that its results can either be meticulously controlled via exact time/temperature documentation, or it can be freely operated in order to produce unique results upon each firing. Not surprisingly, I opt for the latter. With this freedom, however, comes a sizable margin of error.

One night, several hours of enameling resulted in a slew of dull orange-coated pieces. Annoying? Very. But lessons were learned: not all elements of metalwork can be guided by inspiration alone. Some require hours of research, be it physical testing or calling the enamel distributor and asking for help.
With persistence and patience comes balance.

These methods only skim the surface of what will likely be a lifelong process of learning how to properly handle the balance of respect and control within my own artistic universe. In the meantime, I will be mindful of my progress from show to show, festival to festival, attempting to capture what balance I have gained with hopes to transfer it into each piece that I create. Most important is to know when to listen, and also, not to forget when to reward oneself for a hard day's work.

Stay tuned for more updates from my fellow members of Atomic Lime Project. We will be hard at work the next three weeks preparing for our July 22 art opening at Bottega. If you missed the event on facebook, you can find it here. Til next time, internet.
Posted by Atomic Lime Project at 10:48 AM

Melina, this is a great article that is very well written. I think there are also many life lessons that can be drawn from your thoughts. For instance you said, "The truth is, if we are serious about what we do, we must sometimes make serious sacrifices and commitments to amplify our creative output."

That is true for anyone who is intent on being successful. Thanks for reminding me of that.

Plz give me your enamel colors sempal